The past and the present meld in the Cotswold-style home of Stephanie and Chris Dauer on University Avenue in Los Altos.

It looks as if it were lifted from a Beatrix Potter storybook because of its ivy-covered chimney and whimsical wavy cedar-shingle roof. However, behind this cottagelike facade is a spacious, light-filled home that combines early-20th-century details with 21st-century amenities.

The house was built circa 1931 and most likely had two bedrooms. Access to the kitchen was via the living room and dining room. Today, a slate foyer welcomes visitors and provides views of the courtyard through floor-to-ceiling divided-light windows.

Extensively remodeled in 1995, the house now features 3,300 square feet of living space on two levels. In addition, a detached studio with full bath has become the “crafts center” for the Dauers’ children, Linc, 11, and Allie, 9. (Their current project is making soap.)

The Dauers purchased the house three years ago to be closer to Chris’s job at the Hoover Institution at Stanford University, where he is director of marketing and strategic communications. Prior to their move, they lived in a 1927 Spanish Mediterranean home in Oakland. It was love at first sight for Stephanie, who was resigned to living in a ranch home.

“This has the character of an older house but with modern features,” she said. Other pluses were the abundance of light, high ceilings and, of course, the location. Renovations Their first order of business was to replace the random-pattern roof in front. “It took five hours to remove it and five weeks to put it back on, one shingle at a time,” she said. They also updated the kitchen and the lighting. The living room, original to the house, has a high coved ceiling with exposed hand-hewn beams, parquet wood flooring and a Rumford fireplace with classic mantelpiece. Recessed display shelves are built in on either side of the room’s entrance.

“We wanted to use the living room,” said Stephanie, indicating a cozy sectional sofa in front of the fireplace and a separate reading area. A flat-screen TV, concealed by a mirror, sits above the fireplace.

Among its eclectic furnishings – both old and new – are a Lucite pedestal table, antique stool, contemporary console table and souvenirs of travels abroad. An original oil of a nun juggling oranges, by Gary Transue of Sonoma, hangs above the console table.

The focal point of the formal dining room is a landscape by Randall Sexton of San Francisco, purchased by Stephanie several years ago for her apartment in San Francisco. “I got out of posters and began collecting art,” she said. On either side of the painting rest built-in glass-front corner cabinets that are original to the house. Stephanie, an art docent with the Los Altos Educational Foundation, attends open studios in search of art and to meet the artists. She also searches for finds online and at sales. For example, the wood parquet dining room table is from the Oakland Museum’s White Elephant Sale and she found the dining room chairs and chandelier on eBay.

Opposite the dining room, French doors open to a brick-paved loggia, garden and pool. The loggia is the family’s favorite place to eat dinner. The kitchen and adjoining family room are just down the hall from the loggia. They’re unified by a wood paneled ceiling that rises to a center peak. The Dauers updated the kitchen, replacing countertops, appliances and lighting fixtures. What once was all white is now warmed up with earth-toned granite on the island, creamy Caesarstone counters and handmade ceramic-tile backsplashes. The base of the island is painted a sage color. Divided-light windows wrap the family room, which boasts an elevated fireplace with a slate hearth. They added a banquette to a corner of the room for casual dining. Stephanie refinished the banquette’s round oak dining table.

She was her own interior designer but called on the expertise of designer Michael Friedes of Emeryville, who previously helped her with the Oakland house. (She received a certification in interior design from Cañada College.) “We wanted to infuse a sense of freshness and fun in the family room yet keep it clean and elegant,” Friedes said. “The banquette does that. And so does concealing the family room TV behind a mirror.” Her current project is refurbishing the office where computer equipment shares space with a vintage pie safe purchased from an auction house. In addition to the office, there are two bedrooms and two bathrooms downstairs. The master suite – with skylights, coved ceiling with exposed beams, en suite marble bath, dressing area and built-in closets and dressers – occupies the entire upper level. There’s only one problem: The closets and drawers are unusual in size because they’re tucked under the eaves of that undulating Cotswold roof. 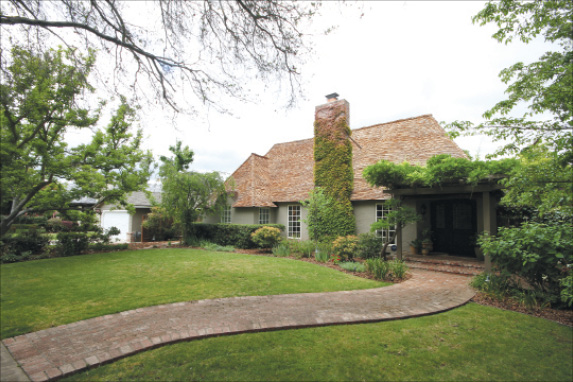