Click here to edit the Social Media Links settings. This text will not be visible on the front end.

David Kornfield described Los Altos as a very special place in Silicon Valley, with a traditional downtown. The city has tried to maintain this special character, but also realizes it needs to keep up with the times. The City of Los Altos Planning Services Manager updated SILVAR members on the city’s future redevelopment plans at last Friday’s Los Altos/Mountain View District tour meeting.
In an effort to retain the traditional characteristics of the community, the City created difficult zoning regulations on purpose. However, it realized over time that it needed to evolve. The City faced many challenges with facilities, store vacancies, and parking issues. So in the last few years it has focused on planning with the help of a special committee composed of citizens representing all interests – from homeowners to business owners.
Kornfield said as a result, the City has come a long way to create a more vibrant downtown, increase its economic potential, yet keep its traditional character and values. Over the last three years it has taken away some zoning restrictions and reduced regulations for office development and increased height limits from one-story to four-story buildings. In addition to zoning changes, the City has invested in infrastructure and underground utilities, and improved its sewer lines.
Much money has been placed in revitalizing downtown. Plans have included the First Street Streetscape, development of San Antonio Road, and redesign of intersections.
“Now, everything is coming together,” said Kornfield. 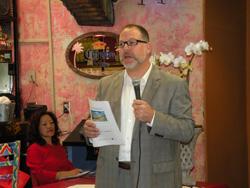 As officials hoped, private investment followed public investment. New projects have included the Packard Foundation on Second Street, a new Safeway on First Street, and mixed-use development projects on Third Street and on First and Main, and plans for First Street condos.

New infrastructure has a different look and feel to it, said Kornfield. New buildings are more sustainable. The Packard Foundation building is the largest net-zero energy building, with a parking management program, ride share and carpool opportunities for employees. The building is sustainable, reuses water from its landscape, has automated blinds, and a solar design.

The future Enchanté Hotel, a boutique hotel on the corner of Main Street and San Antonio, will be an asset, as will the redevelopment of the Civic Center. Kornfield explained the City is currently financially constrained as the public does not appear to want to invest in this plan. The City can’t do it alone, so the plan may have to be revisited, said Kornfield.

The city planning services manager said Los Altos still faces some development constraints. There is still the need for more parking lots, as the city is still short about 200 parking spaces. This issue affects the business environment and needs to be addressed. A study on how to manage the parking supply will be conducted this summer.

Thank you for your inquiry.